We have just heard about the sad passing of Kansai Yamamoto. He came to the gallery once, when we were hosting Masayoshi Sukita’s first UK exhibition back in 2013. I will never forget it. I was hanging pictures at the time, the day before the opening, and I was definitely in “scruff order” —old jeans, trainers and a dirty t-shirt. What a contrast then, when in walked Kansai-san, resplendent in a shiny pink silk three-quarter-length jacket, luxuriant fur scarf and the craziest high heel shoes I had ever seen, all carried off with consummate style and panache. He and Sukita-san were old friends, and had a great catch up that day.

Some of the most popular photographs of David Bowie we offer at the gallery were taken by Masayoshi Sukita and feature Yamamoto-designed costumes—in particular the “Watch That Man” Series. You can see them below, along with another favourite, titled “Starman” which heads up this post.

The “Watch That Man” session took place in New York in 1973. Sukita-San explains: “A few days before the show at Radio City Music Hall, Bowie did a photo session, a rehearsal and an interview at RCA Studio. He went on to do another rehearsal at Radio City Music Hall. Yacco-San was working as the stylist, running here and there with costumes by Kansai Yamamoto that she’d brought over from Japan. They looked marvellous.” Yasuko ‘Yacco’ Takahashi deserves a mention for the part she played. She was the first professional stylist to work in Japan, operating from Tokyo’s Central Apartments complex—housing many of the major names in 1970s Japanese creative industries—fashion, design, music, photography and advertising. Masayoshi Sukita had an office in Central Apartments and worked with Yacco. 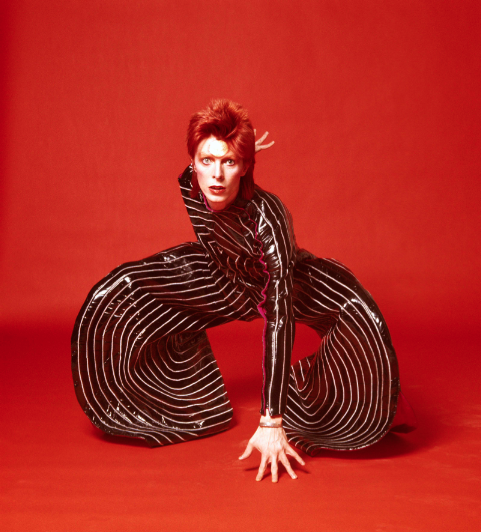 Watch That Man I