This beautiful signed and numbered limited edition book measures 12 x 12 inches and contains 156 pages of Gered’s photographs and personal recollections from his nine sessions with Marianne Faithfull in the 1960s. Many of the photographs have never been published.

The signed hardcover book is housed in its own presentation box and is accompanied by a signed and numbered 12 x 12 inch limited edition photograph of Marianne selected by Gered Mankowitz.

The edition size is small – just 350 individually signed and numbered books are available to collectors worldwide. Clockwise from top: the presentation box lid, the book sitting in the box base (with red ribbon for easy access) and the signed and numbered limited edition print.

More about the book

Gered Mankowitz’s photographs appeared on the front or back covers of three of Marianne’s 1960s albums: Marianne Faithfull, Come My Way and North Country Maid, and his portrait of Marianne in white knee socks in The Salisbury pub on St. Martin’s Lane is one of his best known and best loved images.Gered had nine sessions with Marianne between 1964 and 1967, on location around London, in the recording studio and in his photographic studio at Mason’s Yard.

Marianne Faithfull — Fabulous Beast presents those nine sessions chronologically, and includes approximately 150 photographs over 156 pages. In the book, Gered shares the stories behind the sessions, and the background to meeting and photographing Marianne. Many of the photographs selected by Gered are being published for the first time. As Gered explains: “Because only a few shots were ever chosen from each shoot at the time I took the photographs, I simply filed away the negatives and contact sheets and almost never revisited them. Now that I have had the chance to go through them again and explore them properly at a distance of nearly sixty years, I discovered dozens of shots that I had forgotten—or possibly never really seen properly before, all of which now seem so fresh and new.”

Take a look at some of the double page spreads from Marianne Faithfull — Fabulous Beast in the slideshow.

“I was enraptured by Marianne from the moment we first met in 1964. I fell under her spell immediately. She was gorgeous, bright and funny and had the most wonderful, innocent sexuality. She was a total joy to photograph.” Gered Mankowitz.

A worldwide limited edition of 350 copies, each book signed and numbered by Gered Mankowitz

Book and photograph housed in black presentation box with inset image in lid.

No extra delivery costs for shipping to a UK mainland address. 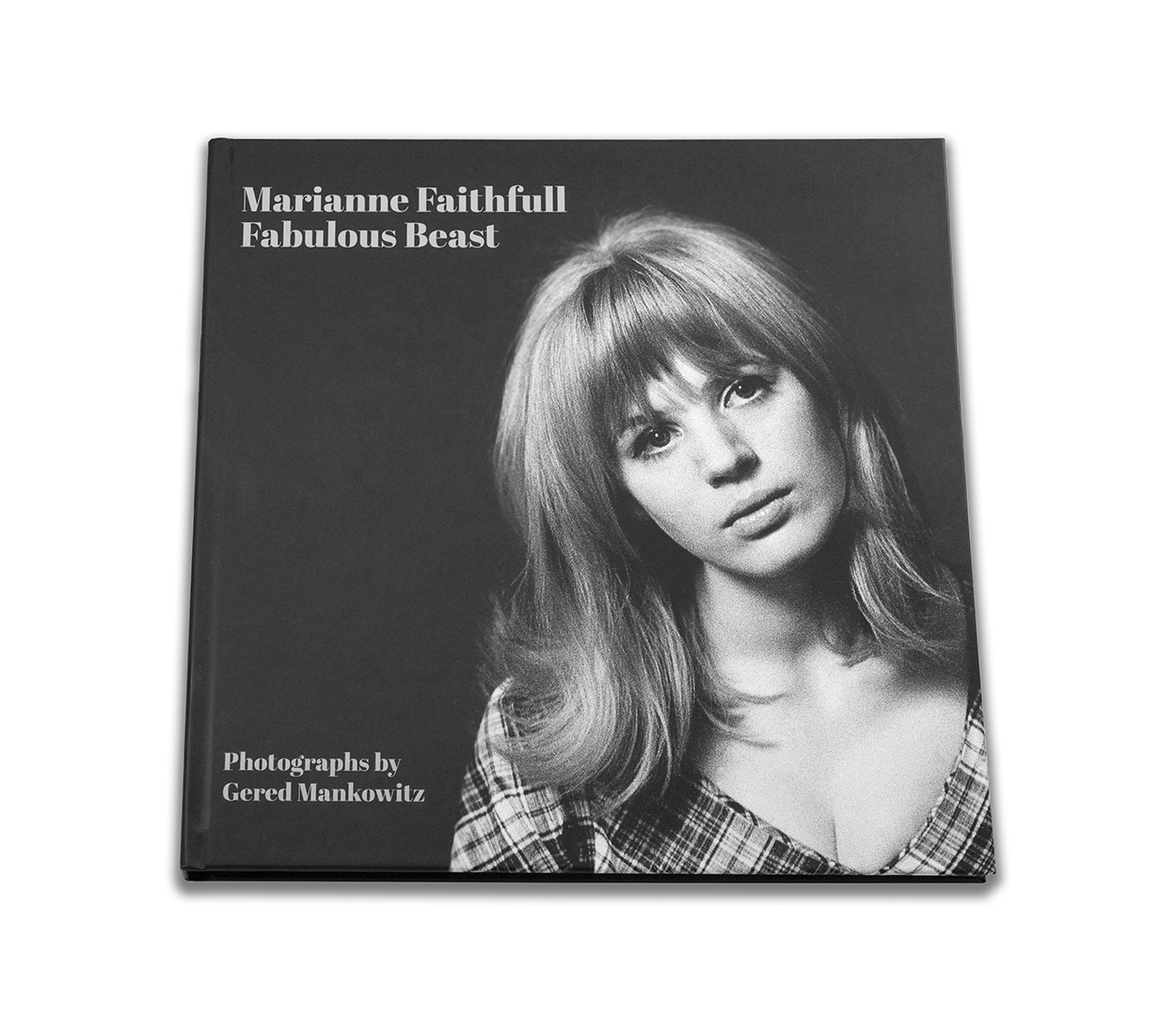 The front cover of the book Each book is accompanied by a signed and numbered limited edition print, which is suitable for framing.

The print is made on Hahnemühle Photo Rag® 308gsm paper. The structure of this white cotton paper lends an impressive pictorial depth, characterised by deep blacks and striking contrasts. The paper is lignum and acid-free making it extremely age resistant.

The image chosen by Gered Mankowitz is a previously unpublished photograph from his fourth session with Marianne Faithfull, taken in his studio at 9 Mason’s Yard, in London’s St James’s district.

Each archival pigment print is made personally by Gered and then signed and numbered by him in pencil on the front under the image area.

Each print is also embossed with his official archive stamp as a further mark of authenticity.

The book and the print have matched edition numbers.

If you would like us to organise framing please get in touch.

Spotlight on a session – The Salisbury pub, London, 1964 Gered remembers this session well: “I knew that we needed some album cover images from our next session, and I had the idea to take Marianne to a wonderful period pub called The Salisbury on St. Martins Lane in the centre of London’s theatre district. It was all very attractive aesthetically, and reminded me of some wonderful photographs taken by the great French master Brassaï for his Paris by Night series back in the early 1930s.”

“The manager of the pub gave his consent and I posed Marianne in a velvet-lined booth and started taking photographs. She looked wonderful: innocent but immensely sexy. In the background, you could make out blurred male patrons looking at her reflected in the mirrors behind her. I thought it looked great. We shot many variations and we both felt that the session had gone really well. When the photograph was presented to Decca Records as the cover they objected to the reflections of the men in the background.”

“While that was disappointing, I still had the satisfaction of having my photograph on the front cover of Come My Way. Coupled with the fact that the Marianne Faithfull album was released on the same day and featured one of my portraits, it felt like a double blessing. In addition to what felt like the huge success of these photographs, Marianne’s manager Andrew Loog Oldham, whom I still hadn’t actually met at that point, asked me to come to his office and meet one of his other acts—The Rolling Stones.”

The most well-known image from this session is frame A3 — shown in the bottom left hand corner of the contact sheet reproduced here. As Gered explains: “This photograph of is probably one of the most important photographs I have taken. It is one of my favourites – the composition, those socks – it just looked gorgeous, but when Decca rejected it, it remained hidden away in my archive, unseen until the 1980s. Now it is my most popular image of Marianne.”

The book is arranged chronologically, showcasing the very best images from each of Gered’s nine sessions with Marianne Gered Mankowitz FRPS was born in London in 1946. He was the first of four sons of the author, playwright and screenwriter Wolf Mankowitz and his wife, the psychotherapist Ann Mankowitz.

He left school at fifteen, avoiding all exams, and completed his education devoid of any formal qualifications. He was inspired to take up photography by the legendary actor Peter Sellers, who was a business associate of his father. Photographer Tom Blau saw Gered’s photographs and offered him an apprenticeship at his famous photo agency, Camera Press Ltd, in London. In 1961 Gered was offered a chance to go to Paris for the autumn collections, working for fashion photographer Alec Murray. On returning to London he went to work for the portraitist Jeff Vickers, where Gered developed his show business contacts and broadened his experience in the studio, taking portraits of many actors and other personalities.

During 1963, Gered met and photographed the singing duo Chad and Jeremy, who had just signed with Ember records. One of these photos was used as the cover of the duo’s first album, Yesterday’s Gone, and Gered found himself working in the music industry at a time when it desperately needed new, mould-breaking images. He began to work with a new generation of producer/managers like John Barry, Shel Talmy and Chris Blackwell, photographing artists who were of his own generation and who felt at ease with him in a way that had not been possible with the old school of established photographers.

At the end of 1963 Gered opened his first studio at 9 Mason’s Yard in the heart of St James’s in London’s West End. Within a few months Gered had already begun to make a name for himself in the music business, and through his work with Marianne Faithfull Gered met her manager and producer Andrew Loog Oldham. In early 1965, Oldham asked him to photograph the Rolling Stones, whom he also managed and produced. This was a major turning point in Gered’s career, because from this first session came the cover for Out of Our Heads (US title December’s Children), and as a result he was asked by the Stones to go to America with them on their record breaking 1965 autumn tour. Gered continued working with the Stones as their ‘official’ photographer, producing photos for albums and for press and publicity until mid-1967, when the band broke off with their manager Oldham.

Early in 1967 Gered worked with Jimi Hendrix & The Experience for two sessions at his Mason’s Yard studio, producing images of Jimi that would go on to become some of the most iconic and widely-known portraits of the great musician. Through the 1960’s, Gered continued in the music world working with Oldham at his famous Immediate label, and with many major artists including Free, Traffic, The Yardbirds, Small Faces and Soft Machine, and into the 1970’s with Slade, Gary Glitter, Suzi Quatro, Sweet, Elton John, Kate Bush, Eurythmics, ABC, Duran Duran and many others.

In 1982 Gered had a major exhibition of his work at London’s famous Photographers’ Gallery, which was seen by over 16,000 people—a record for the gallery at the time, and it then toured the UK for over two years. This exhibition was the first in the UK to focus on the world of music and was a pathfinder in this genre. In 1984 a book based on this exhibition, called ‘Hit Parade’, was published in the UK and USA. Further books and exhibitions have followed over the years. He continued his career in the music industry shooting sessions with artists such as Oasis, Verve, Catatonia, Kula Shaker, Embrace, The Buena Vista Social Club, Snow Patrol, The Bravery, The Duke Spirit and many others.

In 2007 Gered moved to Cornwall in the beautiful south west of England and spends most of his time working from his home, producing personal work as well as running his archive, and lecturing at Falmouth University. In 2016 he was awarded the distinction of a Fellowship of The Royal Photographic Society. In 2020 Gered was the Executive Producer of ICON-Music Through the Lens, a six part television documentary series about music photography. Each copy signed and numbered by Gered Mankowitz

If you have any questions at all about Marianne Faithfull — Fabulous Beast please just ask – we are here to help.