Celebrated photographer and photojournalist, Brian Aris’ impressive oeuvre includes studio sessions with Debbie Harry, The Rolling Stones, David Bowie, Kate Bush and many others. Scroll down to view a selection of his limited edition photographs in a choice of sizes.

We are delighted to announce details of a new limited edition book by Brian Aris, featuring the very best of his David Bowie archives from 1985 to 2000.

Click on the link below to read all about it and secure you copy. READ ABOUT THE BOOK AND ORDER YOUR COPY

Brian recalls: “I first photographed Debbie Harry in 1977. A PR called me and said he had this great looking girl from New York who fronted a band called Blondie and thought we could create some great pictures together. That first session started a relationship that has continued until today.”

“Debbie has a beautiful face and I have loved shooting her over the years. She is always inventive and unpredictable in her looks – which I guess comes from her background in the Greenwich Village art scene of the seventies and eighties. She was friends with Andy Warhol and I thought it was very funny to see his painting of her propped up on a radiator when we worked in her New York apartment in the late eighties. The Bad tee shirt – again with a reference to Warhol – was one of the first images I took of Debbie back in 1977.” Debbie in the mirror Brian recalls: “The David Bowie images that follow were taken on a quiet Sunday in a Dublin studio where once again Julien Temple was the video director and this time the track was ‘You Belong In Rock And Roll’ with David’s band Tin Machine. That track was Tin Machine’s biggest hit in the UK.

Around lunchtime, while the band was rehearsing, the doorbell rang. As everybody was busy I went downstairs and opened up. Standing on the doorstep was Tom Cruise, who said “Hi, I’m Tom Cruise and this is my wife Nicole Kidman we were hoping to come in and see David.”  Of course there was only one answer to that. “Come on in!”. The bandage on David’s leg caused a lot of speculation and conversation at the time. I believe it was covering his new tattoo but it was fun to listen to the rumours.” 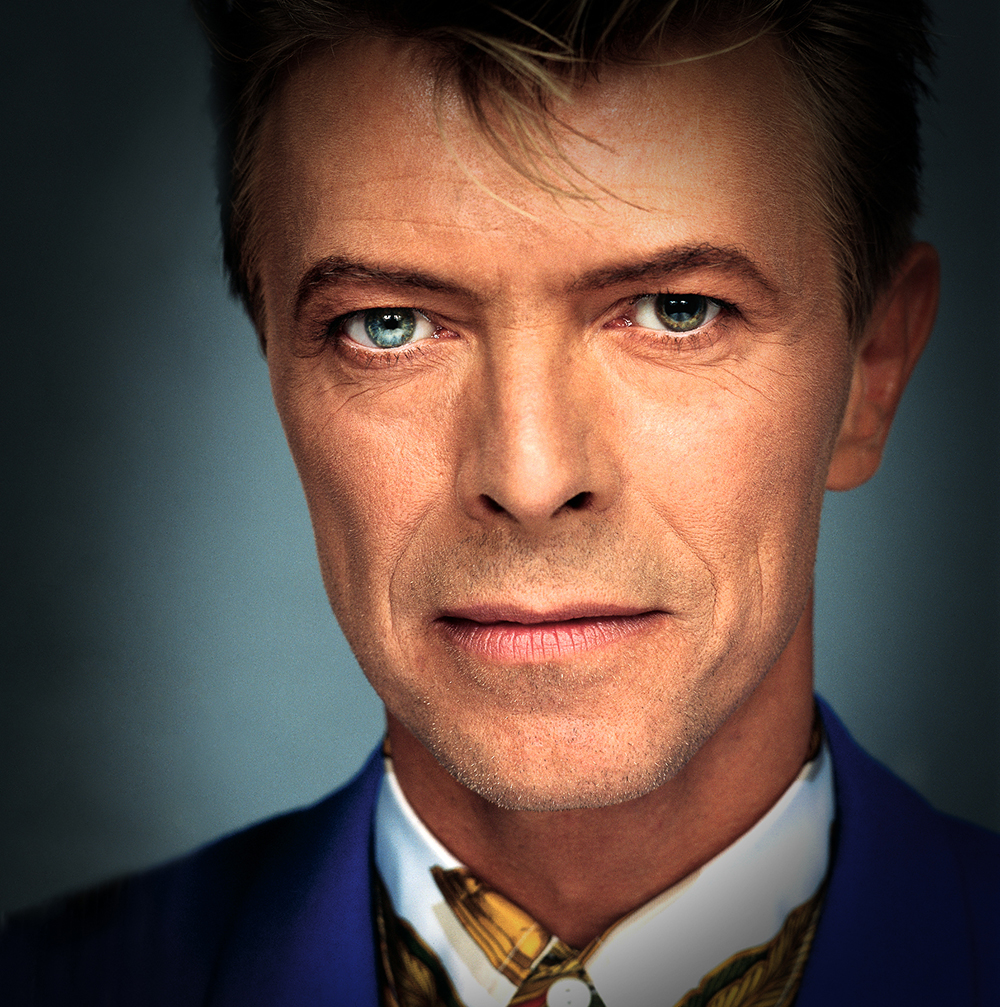 David in the mirror Here’s Brian again: “The Stones are one of my favourite bands – they defy time in their performances to this day. We met up in Paris where they were shooting a video for ‘Undercover of the Night’ with director Julien temple. Shot at the tiny Bain-Douches nightclub,  Jerry Hall was dancing in the front row and Mick’s performance was as frenetic as ever – and of course the great musical on stage relationship between Keith Richards and Ronnie Wood was brilliant to photograph. The studio pictures of Mick were taken in a much quieter atmosphere at Holborn Studios in London where I seem to have spent most of the eighties.” Brian Aris began his photographic career as a photojournalist, working for a London agency. Over the next nine years a series of frontline assignments took him around the world – to cover the civil unrest and riots at the start of the troubles in Northern Ireland, the plight of Palestinian children in Jordan, the civil war in Lebanon, famine in Africa and the war in Vietnam, where he worked until the final days of the conflict in Saigon. He then decided on a complete change of direction and opened a studio in London where he started photographing fashion and glamour models for newspapers and magazines. At the same time he gradually broadened his studio work to include pop and rock stars such as Blondie, The Jam and The Clash.

During the next two decades he covered every aspect of the music scene from punk rock, glam rock and rock ‘n’ roll with the Rolling Stones right through to the emergence of the boy bands and then the girl power that arrived with The Spice Girls. Brian also photographed David Bowie’s wedding to Iman in a cathedral in Florence among other high profile weddings. He went on to photograph Her Majesty the Queen Mother at Clarence House and Her Royal Highness Princess Margaret at Kensington Palace. He was then commissioned to produce the official portraits marking both Her Majesty The Queen’s 70th birthday and, later, the Golden Wedding Anniversary of her marriage to His Royal Highness The Duke of Edinburgh. Brian has also been commissioned to photograph the Duke of York, the Duchess of York and most recently the wedding of Princess Anne’s son Peter Phillips.

For many years now Brian has worked closely with Twiggy and his pictures of the supermodel are among the photographs he has on show at The National Portrait Gallery in London. His images of Mick Jagger were have been shown at the prestigious Recontres D’Arles exhibition in France and he has also recently had his first exhibition at the Royal Circle of Art in Barcelona. His archive represents one of the largest individual collections in the U.K.