Astrid Kirchherr, the acclaimed German photographer who created the earliest formal group portrait of The Beatles, died on Tuesday 12 May 2020. She was 81, and passed away a few days short of her 82nd birthday.

Astrid’s archive needs no introduction to Beatles fans. She played an instrumental part in creating and documenting their early look, not just from behind the lens, but in influencing their hairstyles and clothes. As George Harrison famously put it:

“Astrid was the one, really, who influenced our image more than anybody. She made us look good. She was the one who had the leather kecks and the Beatles haircut.”

It all started in Autumn 1960. Close your eyes and you can picture it. Hamburg. The Reeperbahn. A young photographer visits the Kaiserkeller bar at the insistence of her boyfriend to watch a five piece rock and roll band from England. Some moments are life-changing.

Astrid Kirchherr was that young photographer. Just 22, and cutting her professional teeth working as a studio assistant to the German photographer Reinhart Wolf, she witnessed something we Beatles fans —we mortals—can only dream of. The chance to get up close to and actually hear the Beatles at their peak (so said John Lennon) playing for hours on end, night after night.

She later said: “It was like a merry-go-round in my head, they looked absolutely astonishing… My whole life changed in a couple of minutes. All I wanted was to be with them and to know them.”

Befriending the band came next, and falling in love with bassist Stuart Sutcliffe. In late 1960 she created the first formal—arguably professional—group portrait of The Beatles. The scene was the Heiligengeistfeld ( Holy Ghost field) fairground in central Hamburg, and Astrid arranged the band-members with their instruments on a trailer with the twisting metal structure of the rollercoaster in the background. George, John and Paul were in central positions, with Pete and Stuart on the flanks. Isn’t it funny how things like that happen—a random set-up or the group’s ‘natural’ position, with the leader, John, plum-centre?

Astrid made this photograph on medium format film—a square negative—but she always preferred to present the image cropped into a landscape format. As a result many people don’t immediately realise that the structure in the background is a rollercoaster. This becomes clear when you see the complete square frame.

Later on in that same session, she made two inspired and technically accomplished solo portraits of John Lennon and Paul McCartney. In each photograph Astrid positioned Stuart Sutcliffe standing in the background to the left, wearing sunglasses and holding his bass, and John and Paul close-up in the foreground. The depth of field meant that John and Paul were in focus, while Stuart took on a blurred, spectral form. For me these two portraits take on allegorical meanings with the passing of time—Paul taking over from Stuart on bass, after a relationship that was never easy; John remembering his great friend Stuart, who would die unexpectedly in 1962.

It was Astrid who broke the news of Stuart’s sudden death to John when the Beatles returned to Hamburg in April 1962, and during that visit she photographed John and George in the attic at her house—the room where Stuart had made his paintings.

She photographed the Beatles later in 1962 at Reinhart Wolf’s studio with the classic four piece line up which now included Ringo. Astrid shot the band against a traditional studio paper-roll backdrop, making use of some of Reinhart Wolf’s studio props—a gothic chair and candelabra. Out are the leathers and quiffs, in are the matching suits and haircuts. Things were about to go stratospheric for Astrid’s boys.

Astrid worked with them again in 1964 on the set of A Hard Day’s Night, and, a few years later as a special favour to George (her second favourite Beatle after Stuart) she made a portrait of him for his 1968 Wonderwall album.

I feel very lucky to have worked with Astrid since the early days of the gallery. One of my cherished possessions is a print she made for me many years ago from that late 1962 studio session, on which she wrote me a special message.

Astrid’s assured and innovative self-portrait, one of my favourite photographs, heads up this page. For me it encapsulates her style and creativity. The decision to suspend that branch from the ceiling in her self portrait is a pure example of her acute sense how to fill space. Astrid passed away on the afternoon of Tuesday 12 May 2020, and she leaves a space that can’t be filled. Hers was a special talent, and her photographs are immortal. Thank you Astrid. We will miss you. Photographs of The Beatles 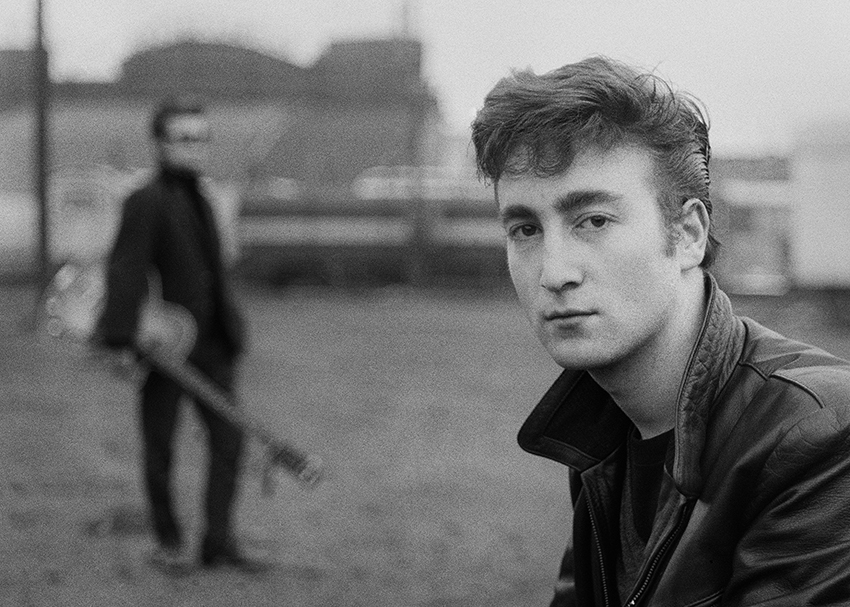 George and John in Astrid’s attic, close up portrait, Hamburg, 1962 About the limited edition photographs

Astrid’s signed limited edition photographs are available in a choice of three physical size options, and each one is individually signed and numbered by Astrid in the white border under the image area. The book of Kirchherr’s images, entitled Astrid Kirchherr with The Beatles, presents more than 70 black and white and colour images alongside materials that retrace the close and intimate relationship which grew between the photographer and the band.

Copies are usually available to purchase at the gallery.