David Hurn spent several weeks on the sets of A Hard Day’s Night – the first Beatles film, recording the process and capturing an informal portrait of the band at work.

Made at the height of Beatlemania in 1964, A Hard Day’s Night helped to cement the Beatles’ status as superstars. Blurring the lines between the reality of their pop-star status and fiction, the film follows several days in the life of the group as they navigate television appearances and record label executives. The film was shot in near sequential order – shooting began on 2 March 1964. Most of the shooting was done on an actual traveling train leaving daily from Marylebone Station (London) traveling to Minehead (Somerset). It meant that the space was very confined – sometimes in a small carriage, there had to be the four Beatles, the director, the lighting cameraman, and at that time a large cinematic camera. The Beatles on a train platform during the filming of ‘A Hard Days Night’, 1964

“I was asked to be ‘special photographer’ on the film. My position largely came about through what is called networking. When I started in photography I had a friend, John Antrobus, he became a comedy writer and joined an agency called Associated London Scripts, who included writers such a Spike Milligan of The Goon Show fame. Together, they wrote for Peter Sellers who made The Running, Jumping and Standing Still Film. This was directed by Dick Lester. The Beatles were fans of this film so when Dick Lester was asked to direct A Hard Days Night, I came as part of the package.” 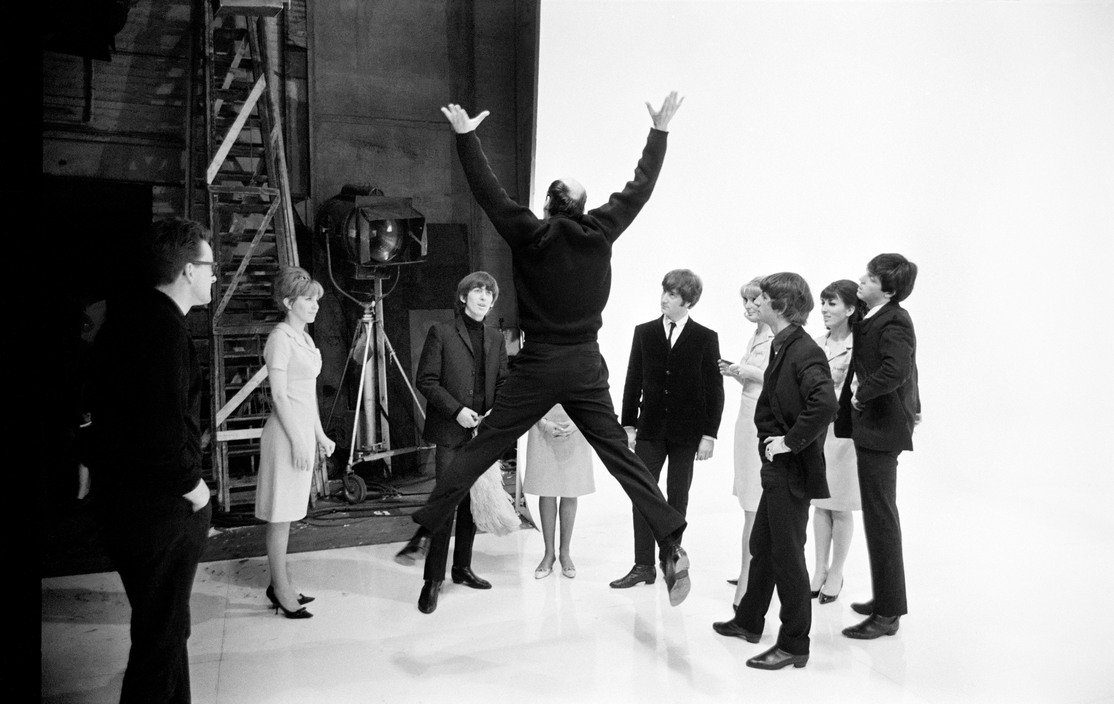 The Beatles during the filming of ‘A Hard Days Night’ with the director, Dick Lester, leaping on stage, 1964.

“The train would stop, for various shooting reasons, several times during the journey. Miraculously, thousands of fans would appear at every stop seemingly from nowhere – I spent a lot of time photographing action between bodyguards and police and those fans. This was difficult as I had to judge how long the train was stopping for, and I had to make sure I would be able to get back on to it – usually with a gaggle of young girls trying to be in tow.” David Hurn The Beatles during the filming of ‘A Hard Days Night’, 1964.

“It was hard to get all four Beatles in the same picture … Some evenings we just used to play Monopoly. In retrospect, I should have taken pictures of that too. I’m afraid I was too competitive to want to get up from the table.” – David Hurn The Beatles in EMI studios (later renamed Abbey Road Studios), examining the script of the film ‘A Hard Days Night’. 1964.

David Hurn is one of Britain’s most respected and important documentary photographers. He was first inspired to a life behind the lens after seeing the warmth and humanity in Henri Cartier-Bresson’s photographs of Russian life in 1955.

Hurn earned an early reputation as a photographer for his early photo essays from the 1946 Hungarian revolution. As a freelance photojournalist, he worked on a series of gritty documentary projects that explored subjects such as strippers and drug addicts in London, while also supplementing his income with fashion shoots. Hurn became a member of the reputed Magnum photo agency in 1965. He also worked in the film industry, as a special photographer for films like El Cid, A Hard Day’s Night, From Russia With Love and Barbarella.

In the early 1970s, Hurn moved back to his native Wales, setting up the renowned School of Documentary Photography in Newport. His book On Being a Photographer, written in 1997 with Professor Bill Jay, is one of the most widely read textbooks on photography. Today, Turn lives and works from his home in Tintern, Wales, while teaching and exhibiting worldwide.